The walk to Lissos is the most popular walk for people staying in Sougia. This walk is relatively easy, doesn't take long (about 90 minutes each way) and Lissos is a very beautiful and peaceful place with interesting remains of ancient civilization.

The walk starts at the harbour of Sougia. Whilst passing there, note the ancient water line which is clearly visible in the cliff, about 7 meters above the present sea level. This sudden elevation happened about 1500 years ago in western Crete.
At the entrance of the small gorge, a fence must be opened (& closed afterwards). The turn is quite clearly marked with the sign E4 and after clambering over a smooth rock (step on this one really carefully on the way back, it is bvery slippery) you get on the path leading to Lissos.
After following the path in the shade of pine trees for about half an hour (there are a few branches to the path but it is impossible to get lost) you will pass an impressive smooth cliff overhanging the trail. Ten minutes later the path veers off to the left and starts climbing up the hill. The turn is quite clearly marked but there is still a slight risk that you might miss it and carry on walking in the gorge so keep an eye out for it.
The good path up the hills then leads through old pine trees to a treeless plateau with good views all around. After ten more minutes walking straight towards the West you arrive at a steep drop with beautiful views of Lissos. Lissos is like a bowl of vegetation fields and terraces leading to the sea.
The path then takes you down into the valley only a few meters away from the Aesculap temple.
The return is by the same path. Make a note of where it starts so that you can find it easily when you decide to return to Sougia.

It is worth spending a while exploring Lissos and soaking up its incredibly peaceful atmosphere. Beside the better-known Aesculap temple and Roman necropolis (on the western slope of the bowl) there are also two chapels. Agios Kyriakos has some nice frescoes and the chapel of the Panagia (close to the sea) shows how chapel builders "recycled" ancient (Roman in this case) sites and integrated them in their building: the chapel has several carved marble blocks in its walls.
Wandering around, you will also see numerous remains of habitations, terraces, threshing circles as well as some impressively old olive trees, one of them probably going back to the Roman times where Lissos was an important settlement.

The small beach is a coarse pebble beach and unfortunately almost always has quite a bit of tar on it. This is rather strange considering that the beach of Sougia never has any tar on it but probably due to different currents.

Note that nobody lives in Lissos and you will need to take a picnic with you. You can get good drinking water (after all Lissos was famous for its spring which was said to have healing properties) in a couple of places, one of them is marked on the map below.
If you are not up to walking to Lissos it is possible to go there by boat. 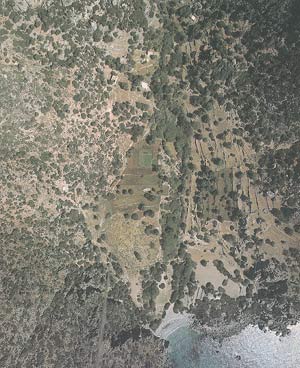 Aerial view of Lissos
Click on the picture to open a large version showing the location of the temple, chapels and Roman graves.
The photograph used is from the wonderful book "The Aerial Atlas of Ancient Crete" available from University of California Press; ISBN: 0520073827

Photos of the walk to Lissos